Find the Packages By Provider

Save 20% on Mobile Broadband 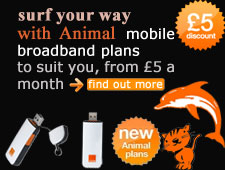 Mobile-broadband.org.uk has been built as a conclusion of our research about the next generation communication. We have been analyzing the broadband sector for many years. Being fast, mobile and reliable the mobile broadband has gained greater expectation among the customers. So why not have a dedicated website that helps you to know anything about the technology.


We study the new technologies created to improve the performance of mobile broadband. Also there is a closer watch on the implementation of these technologies and the improvements given by different providers across UK. The calculation of the difference in speed, price, usage limits, offers and other deals between the different providers in the country is reported via the website. More over the results of our analysis which will help to choose the best service based on your requirement and get a better value for money.

Our team of dedicated analysts provides you with the most updated information and helps you to be the first to reach the best offer, deals and promotions available for the purchase of a mobile broadband online.

Mobile broadband is a latest technology that provides wireless internet access using a mobile network. It works based on the mobile phone standards like GPRS, HSDPA, WiMax, etc. This service is offered using a mobile broadband modem which is connected to the USB port of the computer. The USB modem uses a SIM card to access the nearest mobile base station of the provider. This technology provides a more convenient and safe communication than any other type of broadband service. However the mobile broadband speeds have not reached the level of cable broadband in UK, but is expected to provide faster speeds in the future.

Data tranfer through the mobile network is technology which is consistently growing since the early nineties. GSM, CDMA, CDMA-one, etc, were known as the 2G standards which transferred data at a rate below 1Mbps. The evolution of present technologies like GPRS, EDGE, HSDPA, EV-DO, etc, is known as the 3G standard. The 3G broadband networks are able to transfer data at a maximum speed of 14.4Mbps. While UK is still under the transition of upgrading the mobile networks to 3G standards, researchers around the world are getting ready to announce the 4G standards which is expected to transfer data at a speed more than 100Mbps through a mobile network.

In UK, almost all the mobile operators like 3 Mobile Broadband, Vodafone, O2 Mobile, T-Mobile, Orange and Virgin Mobile have adapted the mobile broadband technology. The services offered by the providers are quite different among each other. Also all the mobile broadband providers in UK stand unique with their outstanding plans and services. It's definitely the joint effort of these providers which can bring in seamless internet connectivity within the country. Moreover, in areas of low inhabitants some providers have joined hands to lay integrated base stations.

Almost 90% of UK is covered by the mobile networks, but the 3G networks haven't spread widely in the country. However all the mobile broadband providers in UK have assured that the process of upgradation of these networks will be completed by the end of 2010. All the major cities in UK receive a complete coverage while some areas in the northern part of the country and some areas in the west still lag in receiving a better mobile broadband coverage. Implementation of these new standards like 3G and 4G also increases the frequency range of the signals which improves coverage across UK.

Speed of the data travel depends upon a number of factors. One of the most important factors of mobile broadband speed is the signal strength. Even though mobile networks are vulnerable to many hindrances, there are existing and new technologies which can improve the penetration of the signals and provide better speeds. Some mobile broadband providers in UK have reached speed levels up to 7.2Mbps. They are also in a plan of boosting up these speed levels to the maximum of 14.4Mbps. However, most of the providers in UK are still between the speed limits of 2.8Mbps to 4.5Mbps.

All the mobile broadband providers in UK are also global leaders of the mobile network across the world. Some operators run their own mobile broadband abroad network across many countries through which they are able to provide seamless connectivity to the users while travelling abroad. The countries where the operators do not have their own networks are covered using the partnered network operators of the respective country. So the roaming tariffs will be higher than the tariffs in UK. Also roaming facilities should be activated or added to the account before travelling. Roaming across Europe would be a little cheaper than roaming in rest of Europe.

Depending upon the usage and the types of devices that access a mobile broadband service, the providers in UK offer different types of modems. USB modems and USB dongles are the most familiar types which can be connected to the USB port of the computer using a USB cable. Wireless internet access to multiple devices is offered using devices like the Mi-Fi dongles. Other types of modems include the data cards which requires a separate slot in the laptop and the inbuilt mobile broadband modem which is available with specific laptops that is offered by the providers.

Pay monthly mobile broadband contract may or may not include any initial deposit. Customers are required to sign up for a contract of 12, 18 or 24 month period. Most of these plans offer the broadband modem for free. Customers have to pay a minimum monthly rental which will vary according to the maximum download limit. This type of contract suits well for regular internet users. But exceeding the usage might cost extra money or connection being suspended.

Short Term contracts are mobile broadband monthly contracts that are offered for beginners for a short period of time. These plans are offered between 1 month to 12 months. Once the contract period is over its the customer's wish to continue the service, else the modem can be used as a pay as you go modem.

Pay as you Go

Pay as you go mobile broadband service will not be bounded to any contract. Customers have to pay for the USB modem and then purchase a top up based on the download required. This type of plan will suit best for beginners and non-frequent users of the internet. But customers have to top-up the connection every time for accessing the internet. Students prefer to use the pay as you go service.

Mobile Broadband users who would like to change the SIM for some reasons like lost, broken, damaged, or cancelled are allowed to apply for mobile broadband SIM only plans and get a SIM card. These SIM cards will work only with the modems provided by the respective opertaors.

There might be number of users who feel inconvenient or might not be aware about the various long term contracts. These types of users might choose to get a mobile broadband no contract deals which does not require to top up for the service. They can pay just once and start using the internet for up to a year. It's always the user's choice to either continue or cancel the service.

Wireless internet is also offered by many mobile broadband operators. Since the speed and coverage of the networks keeps growing, internet sharing would be the best choice for home users and users with multiple gadgets. Some providers offer mobile broadband routers that can create a Wi-Fi zone within the home. Users can also use wireless routers which connect to the internet using a separate USB modem and share wireless mobile broadband connection.

Due the mobility, ease of use and better speeds, the mobile broadband modems are also a choice of communication by most of the business users. The providers also offer many different plans and devices that can help suit the business environment. Along with a business mobile broadband service they also get the hook of other services like firewall protection, VPN connection, File sharing, internet sharing, unlimited download, seamless roaming packages, back up services, free Netbooks etc.

Everybody is prone to download a lot from the internet. But there are still a million who does not know the how the download limits are calculated and billed. Also few assume to download as much they can, if they subscribe for an unlimited download plan. But that's not true, especially with mobile broadband.

All the unlimited download plans are subjected to a fair usage policy. It means that the plans are actually limited to a maximum of 20 GB usage per month. Anyone who exceeds the download limit is noted by the service provider and is subjected for necessary actions.

Customers might be annoying for implementing a fair usage policy. But the reason behind that is to facilitate equal usage of the internet by all the users. The signal that is transmitted to a particular area is shared by multiple users. If any one of the user continuously downloads large amount of data like movies, music, software and streaming videos from the internet, then it might slow down the speed of the internet for the other users. To avoid trouble the broadband providers monitor the usage and slow down or cut off the internet connection of the high downloader. This mostly happen during the peak hours. This fairly helps other users also to enjoy the power of the web. Also download of the pirated versions of the software, movies and games can be reduced by restricting usage. But the users with an unlimited plan rarely will cross the download limit by just browsing web pages.

Even though the fair usage policy is implemented to help most of the customers, many are still upset since they are not informed about this during subscription.

So it's important for the customers to know that even if they purchase an unlimited plan they are subjected to the fair usage policy. Also it's good that customers monitor their usage on a regular basis to avoid excess payments and disconnection of the service.